Shared at the prayer conference Your Kingdom Come in the North, Tromsø April the 24th 2010 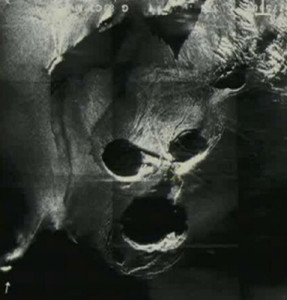 What a privilege to know the Creator of the universe. He did not leave us with a book without ever speaking to us again. He still speaks by his Spirit and through his creation.

When the Icelandic volcano Eyjafjallajökull erupted, huge clouds of ash filled the atmosphere and paralyzed the air traffic in Europe for several days. Radar photos from the Icelandic coast guard depicted the volcano as a skull with three craters resembling orbital cavities and a big mouth spitting lava with sulfur and smoke. Almost anyone could get an unpleasant feeling of a supernatural phenomena and a headline in the Norwegian newspaper Aftenposten announced that this was a portrait of the devil himself. However, the powers of darkness are not able to not create mountains or determine the shape of a volcano. There is only one Creator. The image of the skull was the work of the finger of God communicating an important message.

Eyjafjallajökull is the sixth largest glacier in Iceland. Its icecap covers a volcano with a summit elevation of 1,666 meters. At the sixth day after the eruption six million people had been affected by cancelled flights all over Europe. Man was created on the sixth day and six is the number of a man, as it is written concerning the number 666 in Revelation chapter 13.

The Icelandic volcano proclaimed a prophetic message to Europe. The skull represents the brain. We have worshipped human intellect as a replacement for the Creator. Contented with philosophy and science we have renounced our need for God. By worshipping the mind as our god we have opened our continent to a massive spiritual darkness, just as the black smoke from the volcano covered Europe. The volcanic ash paralyzed the air traffic, and a dark spiritual atmosphere has paralyzed spiritual life of the European church as a whole. Clouds of darkness have prevented us from going to the places where God wants us to be in the spirit.

Two days after the eruption I saw in the spirit that God has a rejoinder to the darkness over Europe. In what resembled a satellite photo of northern Norway I saw white smoke emerging in the north and spreading towards the south. It was a cleansing smoke that would replace the dark atmosphere as depicted by the black smoke from the volcano. Instead of ashes and sulfur this clean smoke had a gleam of pink and a smell of roses.

To console those who mourn in Zion,
To give them beauty for ashes,
The oil of joy for mourning,
The garment of praise for the spirit of heaviness;
That they may be called trees of righteousness,
The planting of the LORD, that He may be glorified.
And they shall rebuild the old ruins,
They shall raise up the former desolations,
And they shall repair the ruined cities,
The desolations of many generations.

When I looked closer at the spot where the white smoke emerged, I saw a woman clothed in a wedding dress dancing with her hands highly lifted towards heaven. She is the bride of Christ that is prepared and is rejoicing in her groom. The Lord is pouring out his pure atmosphere from heaven over her while the wind of the Spirit is spreading it southwards.

The Icelandic word “eyja” means island and “fjall” means mountain. The city of Tromsø is an island between mountains and most of northern Norway consists of islands and mountains. Our call is first and foremost to be the bride. When we prepare to meet him, have our pleasure in him and put our focus on the Lord, he will release the cleansing smoke with a beautiful fragrance over Norway and Europe. Our attention shall not be on the darkness but on him.

Now thanks be to God who always leads us in triumph in Christ, and through us diffuses the fragrance of His knowledge in every place (2 Corinthians 2.14).

When the bride prepares to meet her Lord, heaven gives response. We are engaged to Jesus and heaven is preparing the most magnificent wedding in history. Nothing is more important than the love between Jesus and his bride, and nothing will be more important for us than being with our Lord. All of heaven is waiting for the bride to put her focused attention to her groom. Myriads of angels have been dedicated to serve the bride. The glory of heaven has not been given to organizations, denominations, networks or movements, only to the bride of Christ. The glory and power belongs to her only through her relationship with Jesus.

For I have betrothed you to one husband, that I may present you as a chaste virgin to Christ. But I fear, lest somehow, as the serpent deceived Eve by his craftiness, so your minds may be corrupted from the simplicity that is in Christ (2 Corinthians 11.2-3).

Nothing is more important than our love relationship to Jesus and the simplicity that is in Christ. Our hope can not be in our own abilities and the strength of human intellect. Our one and only task is to be the bride of our wonderful Lord. No other identity releases the heavenly intervention and divine transformation of darkness into light. Only the bride can receive and release the cloud of heavenly atmosphere that can change our own country and the European continent.