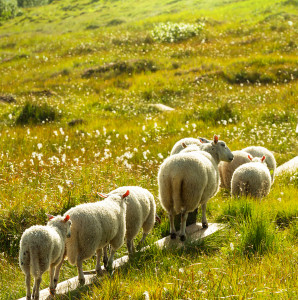 Sheep know the voice of their shepherd. They know the difference between this known voice and all other voices. They know when their shepherd speaks, and they follow him. They will not follow the ones they do not know. We should all know by the Spirit whether we hear the Lord or another spirit. If we love our Lord and want to do His will, we should know if the teaching is from God.

If anyone wills to do His will, he shall know concerning the doctrine, whether it is from God or whether I speak on My own authority  (John 7.17).

We will recognize the known voice of our Lord when He speaks through human beings or in our hearts. Sheep know the characteristics of their shepherd’s voice.

But this does not mean that sheep hear and understand everything their shepherd says. They may know his voice, but sheep are not able to distinguish all the words they hear. They know their shepherd is speaking and they when he is not. But they do not discern the meaning of every word and sentence.

THE PROPHETIC GIFT
Every believer should know when the Lord is speaking. But all believers do not discern every word and sentence that comes from the Lord. Nobody does. But some are called to discern more precisely than the average believer. They may not be better Christians or super spiritual, but they have a prophetic gift that enables them to discern more words and sentences from the mouth of our Shepherd. These people are called to know the voice of the Lord in a special way, not only for their own blessing, but to communicate the heart and mind of Christ to other people.

Those who understand that the Lord has given them a prophetic calling know that they are equipped with spiritual ears that enable them to listen to the spirit world. They may hear a lot, and they need to seek the Lord intensely to know the difference between His voice and all other voices in the unseen realm. Some people become so scared by the very thought of hearing demonic voices that they close their spiritual ears. But there is nothing dangerous about hearing in the spirit world if we keep close to the Lord and seek His guidance.

Prophetic people need to seek spiritual maturity and use their spiritual senses in the presence of the Lord.

But solid food belongs to those who are of full age, that is, those who by reason of use have their senses exercised to discern both good and evil (Hebrews 5.14).

To be able to discern, we must use our spiritual senses. Spiritual hearing and vision come when we exercise in the presence of God. Those with a prophetic calling may have an awesome potential of developing their spiritual senses, but this will not come without proper exercise. To become an athlete one has to do exercises. Muscles get strong when they are used. Some are gifted with a great potential of physical strength and body control, but nobody is born as an Olympic champion. Athletic skills come by training and exercise, natural gifting is not enough in itself.

The same principle is true in the spiritual area. Some are blessed with a spiritual prophetic gift that gives them the potential of developing an extraordinary ability to hear and see in the spiritual world. But this does not come without seeking the One who gives the gift. Prophetic gifting is not dependent of human efforts and spiritual deeds. But the gift will not become mature if we never use it. Our spiritual senses will develop when we start listening to the Lord and seeking to see His glory.

DISCERING THE SPIRITUAL REALM
Those who know the Lord will know His voice. And those who seek Him will learn to discern more clearly the words from His mouth. The prophetic gift is more than anything the ability to discern the spiritual realm, and we need to exercise our spiritual senses in fellowship with the Shepherd. Those who have this gift will normally be more sensitive to the spiritual realm than other people, but without the proper training in His presence, one will not be able to discern His words from the massive noise in the spiritual realm.

The human spirit is a unique instrument. Just like a television or radio receiver our spirit is sensitive to signals that can not be perceived through our physical senses. All humans have the ability to sense signals in the spiritual realm. Man is created in the image of God and we do all have a three dimensional nature of body, soul and spirit. Man is a spiritual being as well as a physical and intellectual. But we are not created equal. No two humans are totally equal in their physical appearance or intellectual capacity. Even one egged twins are unique as physical and mental individuals. Our spirits are no less uniquely created and the Lord has equipped us with spiritual qualities that match His calling and His plans with our lives. 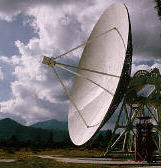 Those who are called to the prophetic have spirits equipped with a powerful sensitivity and selectivity in the spiritual realm. Their spirits can be compared to a satellite receiver that can be tuned to the weak signals of a little satellite in space and separate these from the massive amount of radio signals that fill the air. By proper training in the presence of God prophetic people learn to tune their antenna to the correct satellite and their spiritual receiver to the right channel. The Spirit of God is continually transmitting the contents of the heart of God to listening people all over the world. Prophetic ministry means passing on the signals from God’s heart to other people.

Surely the LORD GOD does nothing, unless He reveals His secret to His servants the prophets (Amos 3.7).

There are secret signals that are sent from the throne of God. Only those who have the right decoding equipment are able to receive this information. Even Satan is not able to understand these coded transmissions. But the Lord will share His heart to listening servants. He imparts the ability to hear and understand His secrets. Prophetic people may hear and see things that are secrets of God. Not everything is to be passed on to other people. Many times God just shares His heart to a trusted prophet because He wants this servant to intercede. Other times He may share His heart for other reasons. Those who are called to prophetic ministry need to develop a sensitivity to the guidance of the Lord to know when to speak and when to remain silent.

KNOWING THE LORD
Nothing is more important than knowing the Lord. The first calling of every prophet is to seek the Lord, not primarily for information but to meet Him and worship Him. The prophetic calling is not only a call to speak in the name of the Lord. Prophets are called to be friends of God who spend time in His presence. To represent Him demands to know Him personally, not only to have knowledge about Him.

Prophetic people may not prophesy for years. The most important thing is not to prophesy, but to know the One who speaks through prophesies. Those who receive a prophetic calling will often be set in the wilderness where they have no visible ministry at all. Some people with powerful prophetic callings will not be known to anybody but the Lord. The important thing is not to be called a prophet or a prophetic minister, but to seek Him. Those who have no personal ambitions may be used to impart powerful prophetic words with tremendous impact in different situations. But He is the One who reveals Himself through prophetic words. We must keep our focus on Jesus.